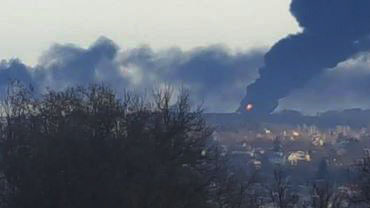 Russo-Ukraine war on the 17th day merciless Russia is raining death on children, The enemy fired eight missiles at Vasilkov airfield – the mayor

Will such innocent people continue to be victims of death?

Russia is not reducing its ammunition even after 17 days of Ukraine war, civilian migration continues in the midst of war, the war is not taking the name of stopping.

The fire at the storage units of frozen products in Kvitneve, Kyiv oblast, after the attack by Russian forces tonight.

WAR2022: Ruthless Russia Innocent children have been killed today by ammunition fired by the Russian army. Bombing continues in Kyiv even today, which is killing civilians.

#WAR2022: #Ruthless #Russia There have also been Russian bombings in Nikolaev, where people continue to flee. Disaster is raining in every city of Ukraine in the form of bombs. The Russian army has laid siege to Kyiv.

The enemy fired eight missiles at Vasilkov airfield – the mayor