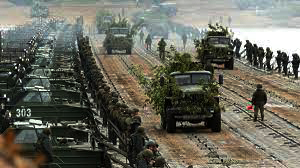 Russians strike an asylum in Kharkiv.

UK Defense Ministry: The number of victims is yet unknown. According to Kharkiv Oblast Governor Oleh Synehubov, 73 people were evacuated, but 330 were still inside at the moment of the attack. Many of them have disabilities

Will Putin run away from Ukraine’s war on the most dangerous day of the Great War?

How when will the battle of the world war turn?

Russia is preparing to send fighters from the Middle East to Ukraine
Putin has approved that Russia will send fighters to Ukraine. The fighters being sent have also fought with IS. fighters will go from syria