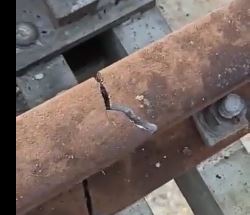 The case of Udaipur Ahmedabad railway line blasting has come to the fore, according to the instant video from the spot, it has been told that where the railway line has been damaged, there has been a blast with gunpowder.

No action has been taken so far in the matter of blowing up the damaged Udaipur Ahmedabad railway track with gunpowder, but railway officials have reached the spot.

Prime Minister Modi had inaugurated this railway line on October 31, within 13 days, the administration has come under fire due to the incident of blasting the truck.

This type of nefarious conspiracy by people with dangerous intentions, this type of incident is very dangerous. If this information is not received on time or is not known, then there was a possibility of a major accident.

Cracked track, broken railway line, marks of blasting, it is clearly telling that there was an intention to cause a serious accident, vigilance has to be taken and lessons should be learned from this so that this type of incident does not happen in future.

Stay tuned to The Times of Capital News.com for further news.