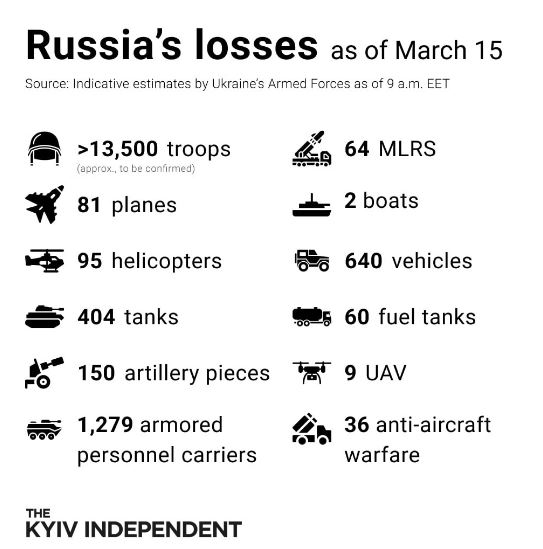 See how the Ukrainian army inflicted damage on Russia

An account is being given of the heavy losses caused to Russia by the armed forces of the Ukrainian army till March 15. It is estimated that Ukraine has inflicted heavy losses on Russia.

These are indicative estimates of Russia’s losses as of March 15, according to the Armed Forces of Ukraine.

An estimate has also emerged that Russia has so far fired 900 missiles at Ukraine.

Ukraine’s state emergency service found seven people dead under the debris of an explosion in Kharkiv.

The Russian army opened fire on Kharkiv on 14 March, causing many

Major damage is expected in the country of Ukraine in the Kholodnohirsky district, north-west of the city. Massive flames engulfed the city, which is easily visible.

It has been estimated that a significant amount of damage has been reported from the Russian side in the Hui shelling.
Photo State Emergency Service of Ukraine

Mateusz Moravetsky of Poland, Petr Fiala of the Czech Republic and Janzez Jansa of Slovenia will call on President Volodymyr Zelensky and Prime Minister Denis Schmayel.

The purpose of the visit is to reaffirm the clear support of the entire European Union for the sovereignty and independence of Ukraine and to present a comprehensive package of support for the Ukrainian state and society,” the Polish government wrote.

See how the Ukrainian army inflicted damage on Russia

also read:–Picture raising the spirits of army soldiers in Ukraine