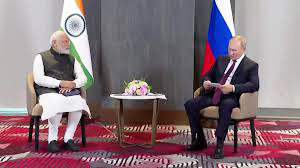 SCO In the summit 2022, along with the friendly countries, the enemy countries also participated in the Samarkand Summit.

Every country’s eyes were on India in Samarkand Asia Summit, what will be the next step

Indian Prime Minister Narendra Modi discussed with Russian President Vladimir Putin, after discussions on both sides, some special things came to the fore.

Shortly after Vladimir Putin spoke to the Prime Minister of India, talk of ending the Ukraine war as soon as possible has come to the fore.

The President of Russia also said that the relationship between Russia and India is very old and very strong, on which no one can have any effect and this relationship will always remain like this.