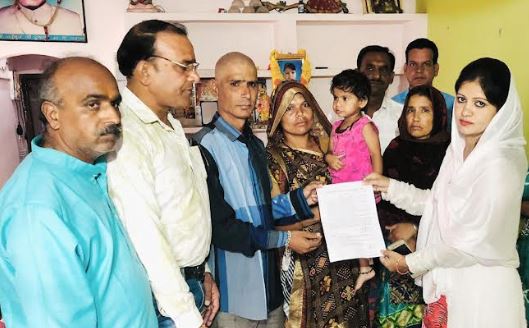 According to the intention of Chief Minister Shivraj Singh Chouhan and on the recommendation of MLA Chetanya Kashyap, the families of five children got financial assistance of four lakh each.

Ratlam, 5 September. During the last four days in the urban area, five children died due to drowning in water at different places. In Karmadi on Sunday afternoon also a child drowned in the pond. MLA Chetanya Kashyap expressed condolences on all the above incidents. He had instructed the administration regarding sanctioning the amount, recommending that immediate financial assistance should be sanctioned to all the victims’ families as per the intention of the Honorable Chief Minister Shivraj Singh Chouhan.

Ratlam 16 death of children: On the recommendation of MLA Shri Kashyap, financial assistance amounting to Rs. 4 lakh each was sanctioned to all the families respectively. Mayor Prahlad Patel and area councilor Vishal Sharma gave a copy of the order of the administration after reaching the victim’s family home. During this, the public representatives also expressed their condolences regarding the said incident. On the other hand, councilors Akshay Sanghvi and Shabana Khan reached the family of two other victims and handed over the copy of the order of acceptance of the assistance amount to Vaigh heir, expressing their condolences.

In respect of the death of the above three girls, financial assistance of .

#Ratlam16deathofchildren: Similarly, on September 3, 11-year-old Ajit’s father Jitendra Dugani died after drowning in a pit filled with water on the opposite side of D-Mart on Pratap Nagar bypass. In the above case also, on the instructions of MLA Shri Kashyap, the administration completed the transfer of financial assistance of .

#Ratlam16 #death #of #children: On Sunday afternoon, 12-year-old Kushal’s father Ashok Rathore, resident of Karmadi Road, died due to drowning in Surajmal Jain pond of Karmadi near the city. In the said case too, MLA Shri Kashyap had made an immediate case and instructed to release the financial assistance amount, on which the amount was approved by making a case to the legal heir of the child.