Rahul Gandhi’s threat case, See how is the letter which created a stir, question on security, one arrested

This raises a question mark about the security of the police administration, be it or not.

Coming to the name of Ratlam MLA Chetanya Kashyap in this whole matter, Chetanya Kashyap from Mumbai discussed with Ratlam SP and Indore commissioner and demanded a high level inquiry demanding the arrest of the person who is involved in this type of work.

See how is the letter that created a stir 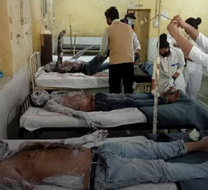