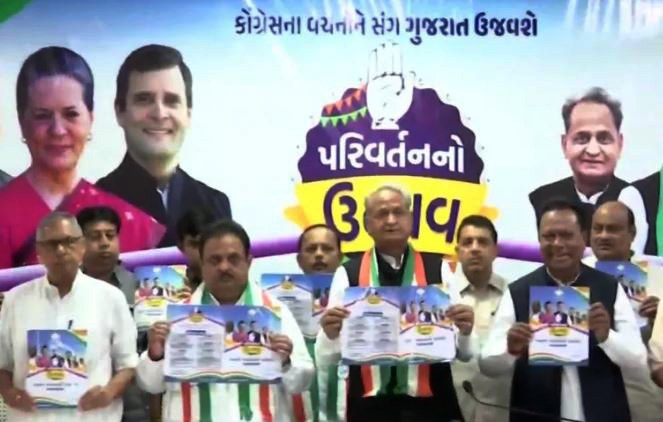 Education, health, farmers, agricultural land law have been mainly added, in which other issues including government, semi-government employees have also been included.

Congress is claiming that if it wins the elections in Gujarat, then all these things will be made available to the general public. While releasing the election manifesto of Gujarat, Rajasthan Chief Minister Ashok Gehlot said that the promises of Rahul Gandhi have been kept in the center.

The manifesto has been issued in the name of Jan Soochna Patra 2022, this time there will be a general public government in Gujarat.

Releasing the election manifesto, the party’s senior observer in Gujarat and Rajasthan Chief Minister Ashok Gehlot said that for 27 years, Gujarat has been suffering from misgovernance and fake development promises. And expressed the hope that this time the Congress government will definitely be formed in Gujarat and all the problems will be solved.

Keeping the health of the general public in mind

In the manifesto, it has been said that a big work will be done in the medical field, along with this, it has also been talked about giving free treatment to the residents of Gujarat after the formation of the government.

Special attention was also given to the farmers

In its manifesto, Congress is promising to provide 10 lakh government jobs in Gujarat, in a way, it is being considered as the biggest means of wooing the youth, talked about getting 50 percent reservation for women, ₹ 100 per day to unemployed youth. Accordingly, it has been said to get ₹ 3000 unemployment allowance.

Congress has made every effort to woo voters from all sides while releasing its manifesto.