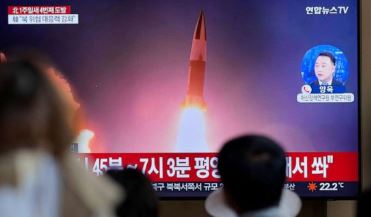 A statement issued by Japan’s Defense Ministry said that North Korea’s Kim Jong has fired a ballistic missile over Japan that was seen in the border area of ​​Japan.

The ballistic missile was launched at 7:22 am local time of Japan and passed over Japan at 7:29 am

Due to this, Japan has lost sleep, while North Korea’s Kim Jong is seen rejoicing over this.

This missile which had gone over Japan, where has it fallen, where has it ended, it has not been detected on the earth in its entirety, it is being investigated

A US defense official has also confirmed this through a news channel and it has been told that the ballistic missile went off in the sky of Japan.

Newspapers in Tokyo also issued an alert to local residents, reporting that North Korea had fired a ballistic missile toward eastern waters it had passed.

The residents of Japan’s Ao Mori and Ho Dant have also been instructed to be alert about the missile fired.

It has been told about the missile that if the missile falls, then a warning has been issued not to touch it or go near it, the Office of the Prime Minister of Japan issued instructions to analyze the situation completely have make