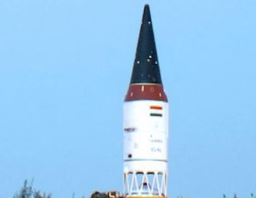 India is taking a new flight in the field of missile technology, continuously taking forward its missile tests, India successfully tested Agni 3 missile from the island of Odisha, you will know that it has been a long time since this missile joined the army. It is an intermediate range ballistic missile capable of carrying a nuclear warhead.

Another feature of this missile is that Dharma can also attack with basic weapons, along with this, it has similar technology like the technique of attacking multiple targets simultaneously.

The biggest feature of Agni 3 missile is its speed, its range is 3 to 5000 kilometers, the range can be reduced by reducing or increasing the weight of the weapon, a large part of China and part of Pakistan and Afghanistan can also come under it jurisdiction. If we talk, countries like Africa, Arab countries, Indonesia, Myanmar also come under its purview.