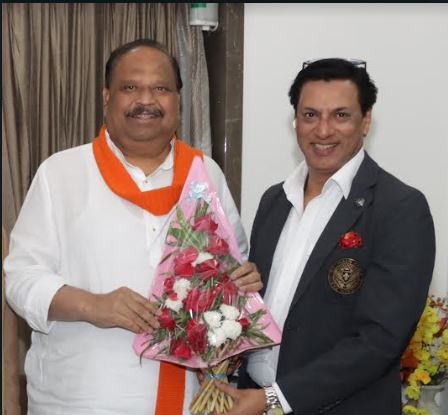 Ratlam 6 November 2022. Bollywood’s famous filmmaker-director Madhur Bhandarkar reached Ratlam and met MLA Chetanya Kashyap. Bhandarkar had come here on personal work, during which he reached MLA Kashyap’s residence to meet him. Shri Bhandarkar is a well-known personality of the film world and a friend of Ratlam musician Siddharth Kashyap, who has spread the magic of his voice. He met MLA Shri Kashyap during his stay in Ratlam.

Many topics were discussed between the two for a long time. During this Nirmal Lunia, Mukesh Jain, Pradyuman Majavadia, Hemant Rahori, Zubeen Jain etc. were present.

Ratlam 6 November 2022. Noted musician Siddharth Kashyap will arrive in Ratlam on Monday morning after performing with his musician team Band Perfect Amalgamation at the Bollywood Music Festival of FIFA World Cup in Doha, Qatar. Composer Shri Kashyap gave innovative performances on 4th November in Doha with the fusion of Indian and Western musical instruments. For the first time, a young musician from Ratlam has showcased his talent on the biggest stage in the world. This has given Ratlam a new identity.