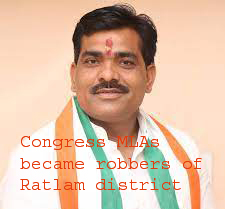 The incident of robbery is often heard in Ratlam district. But have you ever heard or seen that MLAs should become robbers and rob them.

Yes, it’s the same case in M.P. K Ratlam district came to the fore where Congress MLA and his associates looted the godown of fertilizers.

The Congress MLA and his associates did the looting of the fertilizer warehouse, where fertilizers were to be distributed to the farmers doing agriculture for the general public.

The Congress MLA and his comrades came along with their comrades who had been kept for distribution on the government manure, opened the gate of the godown with the companions and handed it over to the crowd. It was the handiwork of a responsible MLA.

Congress MLA from #Alot #Manoj #Chawla reached along with his colleagues in the midst of the ongoing fight over Unia fertilizers across the state and became responsible for looting the fertilizers from the farmers in the fertilizer godown.

Considering this loot of fertilizer as a serious matter, Collector Narendra Kumar Suryavanshi and Superintendent of Police Abhishek Tiwari also reached Alot and #MLA #ManojChawla along with his other colleagues and Congress leader Yogendra Singh Jadon for obstructing work in government matters including loot. Case has been registered.

Incharge applied
The in-charge of State Marketing Association Limited Ratlam Branch Alot applied that on November 10, he was present along with colleague’s computer operator Ashok Kumar Chandravanshi and watchman Asharam and Jagdish Mali and other Hammals to do the work of distribution of fertilizers to the farmers at the warehouse.