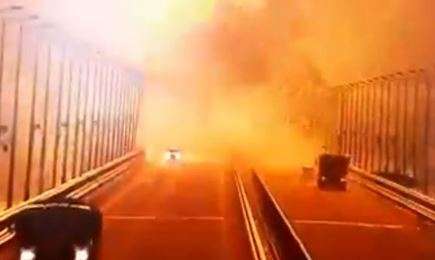 Massive explosion was witnessed on the Kerch Bridge in Crimea

From the latest information received, it can be clearly seen that the way the Kerch bridge is seen in the photo is wrapped in fire. It is not yet known what caused this terrible explosion.

This could be a major disaster or loss for Russia, it has also caused damage to the Kerch Pool connecting Crimea and the Russian Federation.

The Russians were stunned by this terrible explosion that took place early in the morning. A major loss is being estimated.

It is said to be the largest pool in Europe. who collapsed. The fire engulfed what came with it, is said to have engulfed a fueled train.

Russian President Vladimir Putin has ordered a speedy investigation into the crime in Crimea and asked to submit a report. Till writing the news, the officials of the Ministry of Transport have reached the incident.