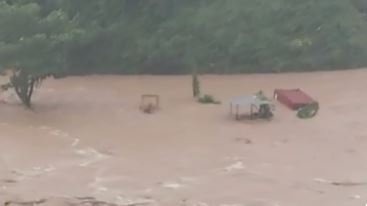 Everything was ruined and the effect of the storm remained intact the next day.

The signs of destruction are visible all around from the Fiano storm. Hurricane Fiano is making its destructive move toward the north on Wednesday.

In Puerto Rico Turks Caicos Dominican Republic, the damage has been seen very high Victims are telling their ailing government. Looking forward to cooperation. The houses destroyed by the storm can be seen clearly.

Disaster Management has started working in the direction of estimating the damage all around.

In what came out from the National Hurricane Center, the winds have been told to blow at a high speed due to the Fiano storm. The wind is blowing at a speed of about 130 mph. It is being said that it will be less and more.

Three days ago there was a storm that destroyed everything in Puerto Rico that took everything with it and caused a lot of damage.

There was damage to the house, market, goods etc. There was a flood of water on the bridge river dam, due to which the citizens ran to save their lives. Now the situation is largely under control.